I pretty much impressed the hell out of my managers by coming up with and implementing a solution to get some annoying customers off of their backs. They both had to show up to an installation I had last week that I couldn't do because there had been demolition and construction in the building and the copper that led to their premises had been cut. I had handed the job over to the construction department for the installation of new riser.

Then they left a voicemail on my pager that it 'fixed itself.' Literally, that's what they said. It "fixed itself." You know what I'm thinking... 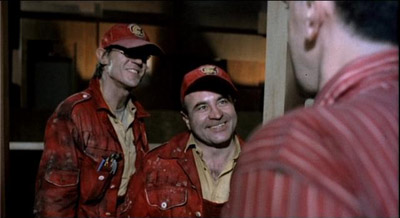 "It fixed itself, has it?"
I might need to make myself an icon of those two someday.

Anyway... of course, things like this don't 'fix themselves.' And construction hadn't worked the job; one thing Verizon is definitely good for is paper trails. You can't always prove that somebody has done a thing, but you can always prove when they damn well haven't (agnostics could seriously learn a lesson or two from the Codes We Work By guide). Well, what this basically meant that they had somebody else run a tie cable and were trying to get us to put the circuit on it. This is illegal; Verizon is responsible for all materials used in their path along the circuit, and so we can only use Verizon property.* Frank, my manager, sent me out there beforehand but by the time he and my second liner Joe showed up, I had already worked out a viable solution to everything. The customer agreed to put a backboard up in the basement and I could wire the smartjack up to their tie cable. Everybody was happy with this. Which was great. The managers left happy.

But then the tester couldn't run to the smartjack, which - because it came in on copper, and I was testing clean to the repeater generating the signal to the field - meant there was trouble in the central office. It was, in fact, soley a transmit problem, which pointed at the cross connect in the central office as it is a single pair circuit out in the field (for which length nothing can effect the transmit without having the same effect on the recieve as both are on the same pair). This means working with carrier technicians, and is a problem because those motherfuckers don't do shit all day other than play poker (I ought to know, I won a few hands against some of them downtown when I was on loan to construction a few years ago), so getting anything actually done by them is a nightmare. Generally, when we have to put a ticket into the central office, we finish up our fieldwork and leave; the job ain't getting turned up that day. This was, however, an overdue high priority job, so it had priority and informed the tech that this was a fourth-level escalation and required him to page me or call the tester. Sure enough, though, when carrier picked up the ticket, they did... er... something... and closed it out without calling anybody.

We don't know exactly what they did the first time around as there seemed to be no alteration in the performance of the circuit whatsoever (that is to say, it was still broke). I had to call carrier with the ticket number and get one of the techs there to work with me on a closed out ticket. I got my tester on the line. Now, the tester found that she didn't have any access to the circuit, which meant that she had to get Time Warner (the service provider, our customer) on the phone to test the circuit for her (this is not ever supposed to be necessary). However, finally with everybody involved working at together (which is what should have been happening as soon as that ticket was picked up in the first place), we managed to suss out the problem (or that is to say, I forced the carrier technician to take everything apart and put it back together again - this time right).

Having been working on channelling my temper in more constructive manners of late, I funnelled my frustration into tenacity while riding the carrier tech's ass while troubleshooting. The best part about it is that he was basically forced into fixing the problem because I placed him into a situation he wasn't used to. With the Time Warner tech on the line representing our customer, he couldn't pull the usual passive aggressive bullshit they sometimes do with us, and had to actually produce results that they (and I) could see. And we got the circuit to work.

Oh, and one of the customers was one of those guys that likes to hang over your shoulder, and if he catches you in his peripheral vision will swoop in like a raptor and ask for some form of status. This may have made sense the first few times, when I was going up and down the elevator... but not so much when he asked me as I passed him on my way to the bathroom... and then when he asked me again on my way back. As he phrased the question, "Anything to report?" that time, I briefly toyed with the idea of responding honestly to that before I decided that might jeopardize the professionalism of the situation.

While my job often annoys the hell out of me, I do have to admit that I'm good at much of it. I statused the job properly with the right people the first time around, which meant that there was no confusion as to what was occuring on my return. Though I wasn't able (by law) to provide the customer exactly what they wanted, I not only came up with a workable solution they were satisfied with, but didn't compromise either the tariff regulations or the integrity of the circuit. In a highly visible job, I was the central force that got it completed. My managers were very thankful and rather effusive with praise, which I feel they should do more often.
* Before you start commenting that this is ridiculous and unfair and that wire is wire or some such similar bleeding-heart idealistic bullshit, I can counter right now that is in no way the case. The tarriff regulations regarding who's property is what are actually very logical; it is absolutely necessary in a circuit whose path goes through several exchange carriers of which Verizon is only one that each of those exchange carriers have complete control of their length. I know, because I've seen the chaos that occurs when they are not followed. Forget it, Lieutenant, it wasn't a pretty picture. I don't think I'll ever be over Macho Grande. Those wounds run... pretty deep.
Collapse