“An elegant weapon for a more civilized age.”

John Willliams' music for the Star Wars trilogy contains some of the most popular and recognizable film music in history. Much of this is because of the monumental social impact that the film series had, becoming the reigning mythology for an entire generation (and swelling both George Lucas' bank account and ego to Death Star-like proportions). The thematic material is well known not just to film music fans, but to the casual man on the street. Luke's theme, the Force theme and the Imperial March are cultural icons unto themselves now.

It was perhaps inevitable after seeing Harmy's Star Wars Despecialized Editions that I would have Star Wars on the brain. I realized that my Star Wars compilation was nearly six years old, and while it had remained amongst my personal favorites of of my own mixes, I felt that there was some room for improvement. Between the new software I employ, better techniques I have developed, and better sound quality sources I could use, that it was perhaps time to revisit one of my first compilations and correct some of the problems I have noticed over the years.

What those familiar with the earlier versions can expect from this revision:

The first and most prevalent change is that of sound quality, which, despite a variety of sources, is much more consistent on this album. Star Wars in particular had a overly aggressive sound which I was able to temper with good results. Several tracks in Empire suffered from clipping or balance issues, and dynamic was a constant issue. I was able to correct issues that I couldn't before, such as the skips in “Brother and Sister” and “The Throne Room and End Title” (the latter track appears whole on the RCA/Sony version, but I wanted to use the take and mix that appeared on the Arista). The transitions and edits have all been completely redone from scratch, and they are much smoother than was possible before.

Another change is in the overall structure of this version of the disc. On the whole, I wanted to use an “if it ain't broke, don't fix it” approach to this assembly, and I wanted to keep it as close to what I knew worked as I could. However, there were a few changes I wanted to make, the most significant perhaps being the elimination of the cue “The Return of the Jedi” which has appeared on all previous incarnations of this album. This track came in the middle of an extended action suite which I felt went on too long, and it consisted almost entirely of variations on Luke's theme and the Rebel Fanfare, both of which are well-represented elsewhere on the album. By dropping this track, I was able to both smooth out the listening experience and flesh out the rest of the album.

Between the expanded palette size I have and the space made available by removing “The Return of the Jedi,” I was able to expand the scope of the album a bit. Several new tracks have been added. “Luke's Nocturnal Visitor” establishes Yoda's theme early on, allowing the variations on his theme that appear later to be more effective. “The Scavengers” presents the memorable music for the Jawas. “The Ewok Battle” provides symmetry for “Heroic Ewok.”

Ultimately, however, my mission statement has been the same for all but the initial revision of this disc — I based this album on two overarching concepts, and I think that is part of what makes it work; the first was the film's representation of good versus evil, in this case represented by the Force theme in conflict with the Imperial March, while the second is the music's representation of the mythic elements that made the films so successful. The Imperial March is heard often and quite stridently at the beginning of the album, but becomes less aggressive as the album goes on, eventually giving way to the diabolical choral theme for Emperor Palpatine; whilst the Force theme begins in a more meditative place and becomes more noble by the end of the disc, reflecting the defeat of tyranny and the restoration of Ben's values to the galaxy.

I received two of the best complements I ever could receive for my original Star Wars trilogy mix... the first was from Nate. I had given him a copy because he was somewhat interested. He called me a few days later from his car with it blasting and asked if he could borrow the DVDs of the trilogy — the music had re-ignited his interest in the originals after having been brutalized by the prequels. The other one was from Art, who, upon receiving my initial revision, viewed it with some skepticism, saying, "I don't know, man, you're fuckin' with the Mona Lisa here." That was big acclaim coming from somebody whose interest in these scores mirrors my own. I was therefore very careful when replacing or moving material not to deviate to much from the structure that I know works.

Index markers appear at several points on this disc (the same places they have appeared in previous versions). If anybody actually has a CD player that still recognizes index markers (let me know, I'm curious if there are any left), they're still there.

I felt that it was time to revisit the cover art, which I had changed only slightly after the initial revision. In creating cover art for the discs I burned for myself of the Despecialized Editions, I found myself gravitating toward the original poster art for each of the three films. These images were not only vintage representations of the films in question, befitting the restoration aspect, but they were also the artwork used on the 1992 Widescreen Edition VHS box set, which contained an abbreviated version of ‘The Creative Impulse’ and From Star Wars To Jedi: The Making of a Saga (Star Wars featured the 1985 sound mix), that I have a personal attachment to because it was the first time I'd seen Star Wars in widescreen since seeing it in the theater. I felt that this collage of all three one-sheets featured in the 1993 THX CAV Definitive Collection laserdisc box set — until

While I did want to create smoother transitions, make more seamless edits, and present the scores in cleaner sound, the primary impetus for taking up this project again was to better balance out the overall listening experience. This edition better communicates the scope of Williams' music for this historic trilogy: the swashbuckling adventure, the white-knuckle tension, the romantic passion, the exotic creatures and locations, and most importantly, the fun! 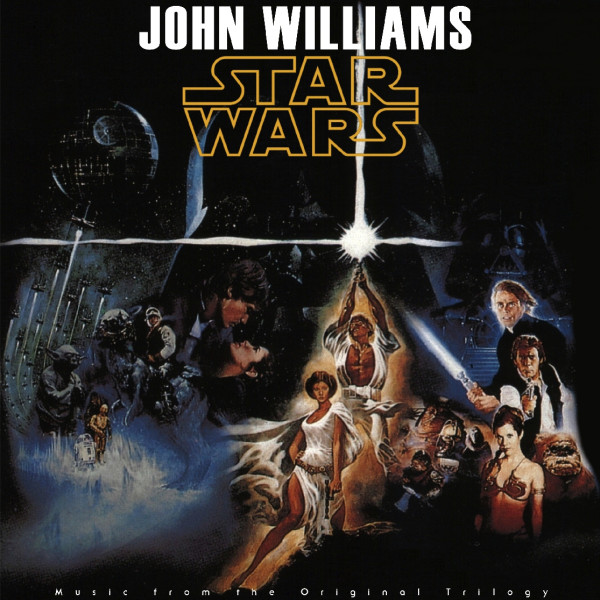 The Empire Strikes Back • Return of the Jedi
Produced by JOHN WILLIAMS
Recorded at EMI/ABBEY ROAD STUDIOS, London, England


May the Force be with you.
Tags: film music, john williams, my mixes, sandy courage, science fiction, star wars
Subscribe