I am the scales of justice, conductor of the choir of death!

Mad Max: Fury Road may be the work of a 70 year old director returning to a franchise (and genre) he last worked on 30 years ago, but I challenge anybody to call it “old fashioned.” Upon my first viewing of this movie, I said that it was George Miller looking at the past three decades of cinema and showing all the young upstarts how action films are made. This is not some has-been dinosaur trying to maintain his relevance in an art form that has long since forgotten him, but rather the work of a master craftsman embracing the newest tools and techniques of the medium without abandoning the flesh-and-petrol approach that rocketed him to the international stage 35 years ago. 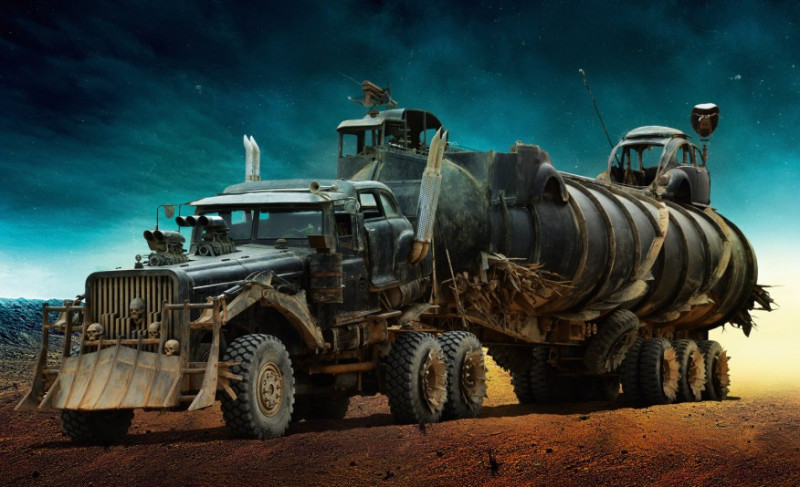 The widescreen cinematography in Mad Max: Fury Road was carefully framed by cinematographer John Seale to keep the focus of the action in the center of the frame. This means that no matter how much the camera may move or how quickly the editing pace is, the viewer is properly oriented to the geography of the scene, and the activity being depicted is clearly communicated to the audience. So while there is a lot of hand-held camerawork in the film, it isn't the notorious “shaky-cam” (this has the added advantage of making the 3D conversion a lot more effective than most, because the compositions tended to lend themselves to the depth of the image). The film is also vividly colorful, a sharp contrast to the desaturated look that has become de rigueur for modern action and science fiction films.

A lot of attention has been given to the fact that the bulk of the most stunts and pyrotechnics were captured in camera as opposed to using CGI. Miller is no Luddite, however, (as is evidenced by his work on the Babe and Happy Feet movies); there are plenty of CGI effects employed in the film, but they are mostly employed to extend the environment, adding minor flourishes to existing shots. What you see on the screen is mostly real, and it gives the action real weight, a visceral quality that ties into the film's themes of survival and redemption. Indeed, if you look at the pictures in the link above, you'll often find that the most impressive aspects of each shot are identical in both the before and after photos. 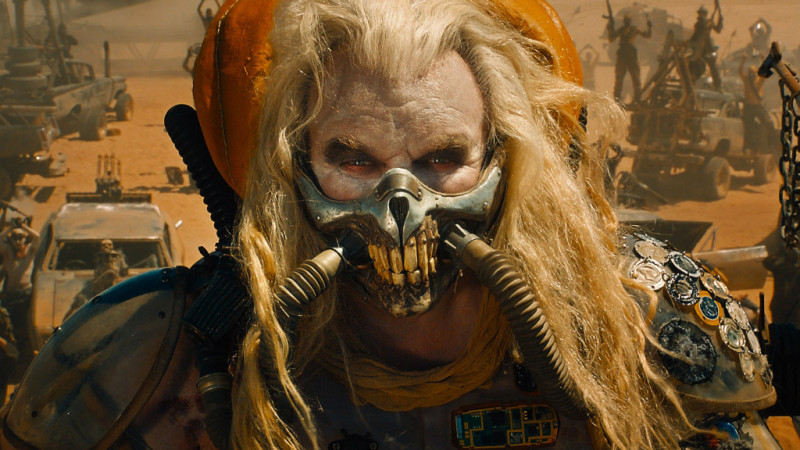 Which brings us to the crux of why this film is special: this film is pure cinema, a story that is told through action and not dialogue, the old adage about “show, don't tell.” There is an audio montage and some minor narration to give the audience the barest of introduction to the story, but otherwise the viewer is dropped into this situation in media res. Tom Hardy's taciturn Max is more of our conduit into this world than he is the main character; indeed, many have said that this is more Charlize Theron's movie than his. However, her Furiosa is such a brilliant performance and character that it I can't really call that a bad thing.

The film also got some press before its release because a PUA, angered at the presence of powerful women in the trailer, wrote an angry screed about how this is a feminist treatise disguised as an action movie. The film does touch on several issues feminism deals with (ownership of female bodies, sexual exploitation, women as breeding stock, female agency, among others), but despite Eve Ensler's participation to give the female cast members psychological context for their roles, the most feminist thing about this movie is just that it treats its female characters with respect. Their experiences matter on their own terms, and none of them exist for the benefit of a male character's story arc. “We are not things” is scrawled upon the wall of their lair in the Citadel, and the film is, refreshingly, about women — Furiosa, the wives, the Vuvalini — refusing to be victims.

The simplicity of the story is one of this film's main strengths. Like the cinematography, the focus of the film is clear and concise, and the forward momentum of the movie is unimpeded by unnecessary details and distractions. Mad Max: Fury Road is a triumph of world-building, with more information being conveyed in a single shot than most films manage to convey in paragraphs of dialogue. A few tracking shots through Immortan Joe's Citadel shows the viewer everything they need to know about that setting and the people who live there, and who Joe is and what motivates him. Similarly, we end up finding a lot out (though not everything) about Furiosa through her actions and very minimal dialogue. One short exchange between Nux and Capable three-quarters of the way into the film in which he shows her “his mates” explains a major element of the War Boys' place in Immortan Joe's cult.

The movie sports a music score composed by Tom Holkenborg (better known as Junkie XL) that is another example of Miller embracing more modern aesthetics. Brian May's score for Mad Max is a loud, booming affair of extremes, harsh and uncompromising brass contrasted to a beautiful love theme for strings and saxophone. May's music for the follow-up Mad Max 2/The Road Warrior is an action powerhouse with a melancholy element mourning the death of civilization. Maurice Jarre was brought in by Warner Brothers for Mad Max Beyond Thunderdome, and delivered a thunderous score that hearkened back to his work on Lawrence of Arabia. 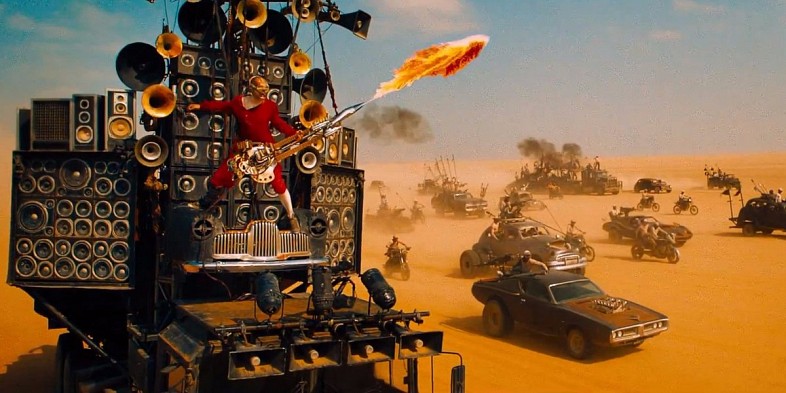 Holkenborg's score is a very different animal, more electronic than orchestral, its overall style kin to the Media Ventures/Remote Control sound established by Hans Zimmer (who raved about this score). While I was not initially thrilled with this prospect, particularly considering that The Road Warrior is one of my all-time favorite film scores, Holkenborg not only crafted an interesting accompaniment to the filmic action, but linked the score to the diegesis in interesting ways. The cue “Spikey Cars” is initiated by Furiosa herself, honking her War Rig horn in the three-note motif that signifies Immortan Joe's war parties. The music produced by the notorious Doof Wagon, a vehicle consisting of taiko drums played by War Boys on one side, and a wall of speakers with the blind Doof Warrior playing a fire-spitting electric guitar on the other, has a tendency to blend into the music scoring the chase itself. The film supplements Holkenborg's score with a few pieces by Eleni Karaindrou, Giusseppe Verdi, Krysztof Penderecki, and Massive Attack, but the central thrust of the music score is Holkenborg's. The cue “Brothers In Arms,” which scores the canyon chase, is one of the best action cues of the year so far.

How does this film fit into the franchise as a whole? There are numerous ideas as to where it takes place in the chronology of the first three films — some say it takes place between the second and third films, Miller has said it probably takes place after Beyond Thunderdome, and a persistent fan theory is that Tom Hardy's Max is not the same Max that Mel Gibson played, but rather the Feral Kid from The Road Warrior, all grown up and with his own inner demons. 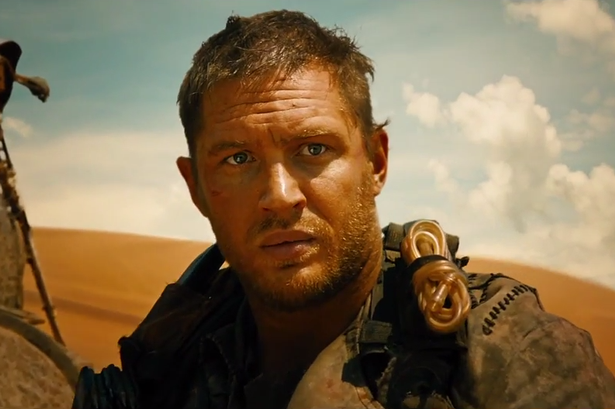 My answer to this question is that I just don't care. This is a movie made thirty years later with a different guy as Max, it's not going to fit perfectly with the original three films (in which continuity was often very loose as well) no matter what you do — and I honestly think there are as many discrepancies if Max is the Feral Kid than if he's still just Max. I don't need everything to fit together perfectly (if the Interceptor is destroyed in The Road Warrior, how does Max have it again in Fury Road and/or vice-versa?). If it helps, imagine that these are all legends told about the mythic figure of Mad Max.

On the other hand, thematically it fits very well with the other films. While Mad Max dealt with the main character's loss of his humanity, the other two films, which were much more Joseph Campbell-inspired, were about him finding glimmers of it within himself through interactions with others in the wasteland. Fury Road follows this template, with a haunted PTSD-suffering Max finally committing himself fully to the cause of others, and rediscovering his own empathy in the process. Fury Road even literalizes this concept with blood in its penultimate scene. In some ways, Fury Road goes beyond either of the previous films by postulating that survival is not enough, that in order for life to be worthwhile there must be something worth living for.

Regardless of the differences, it is undeniable that this is indeed a Mad Max movie, from the cobbled-together vehicles to the stunning stunt work to the way characters are defined by their actions rather than their dialogue to the sheer energy and forward momentum on display at all times in the film.